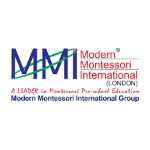 Modern Montessori International (MMI) London is a United Kingdom based multinational education organisation and a leading Montessori pre-school and teacher training operator in the world.

MMI operates 100 pre-school and teacher training colleges in 16 countries across 3 continents. The core programmes of MMI is the time tested Montessori programmes.

MMI infuses the traditional Montessori environment with modern development in Early Childhood Education. This combination offers the best of both world to the education of young children.

Further reinforcing the MMI Group’ excellence in child development services and teacher training is the Group’s accordance with a host of prestigious awards and recognitions.

(ODLQC), Most Influential Brand Award, Asia Most Promising Brand award, Reader Digest “Most Trusted Brand award” and many more. MMI’s core target market is the discerning parents who desire to give their children a quality and proven head start in their early years.

They see MMI’s offerings and brand philosophy as a preferred and desired alternative to mainstream and conventional government-run preschools’ offerings available, even if it means having to pay premium rates.

They see MMI’s offerings and brand philosophy as a preferred and desired alternative to mainstream and conventional government-run preschools’ offerings available, even if it means having to pay premium rates.

The rise in dual income families as well as a trend of declining birth rates are also contributing factors to the increasing desire in parents to seek higher quality education for their offspring and as early as possible. MMI is continuously delivering a consistently high standard of quality education.

This is driven by a proven management system, a prime business model and an astute corporate culture. Added to that, the Group possesses a good branding strategy, an unreserved investment in research and development as well as a capable and dedicated staff to support its cause.

- Be able to teach phonic sound.

- Be able to prepare lesson plans and teach thematic subjects.

We're glad to see you again!

Attach File With CV for

Disclaimer
The CVs submitted to 30sjob will be published to only recruiters. 30sjob shall abide by the UN declaration of Human Rights and make no discrimination based on gender, religion or creed, race, sexual orientation, disability, and shall ensure that all CVs are treated equally and fairly. By sending your CV you are agreeing on this disclaimer and on the 30sjob integrity statement.